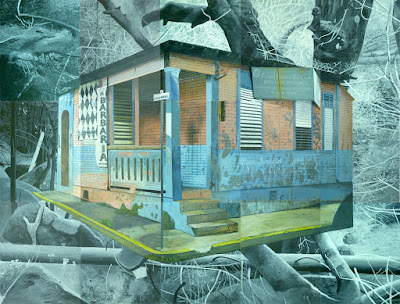 This weekend is the last chance to catch Gordon Picken‘s fantastic exhibition at the Old Ambulance Depot in Edinburgh – it finishes on Sunday. Picken, who is from Kirkintilloch, has been described as one the best painters working in Scotland today. He is interviewed here by fellow artist and admirer Ian Moir:

Do you ever have painting disasters where you realise half way through that the overall picture isn’t working out?
Yes, quite a lot but the way I work I can remove the segments that aren’t working and add in new ones. I never throw any panels away and can usually recycle these into new paintings.

Were you painting large pictures in segments before David Hockney was doing it?
I don’t know about that, I wasn’t aware he was working like this when I started to do it. I got the initial idea when I saw some work in the 80s by the Australian artist Imants Tillers who does massive paintings whilst sitting at a desk. He paints on small canvas panels which join together to make paintings which are sometimes 30 foot long by 10 foot high.  So, years ago when I was asked to do a large exhibition and I didn’t have a big studio, I thought this method might be the answer. Plus, I always liked the way Malcolm Morley squared up his work. 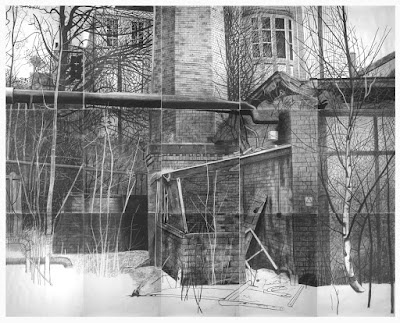 You focus on dilapidated buildings which have been overtaken by nature. How would you describe the feeling you get when you encounter these places. Is it a bad feeling or is it more spiritual?
More a feeling that something has been lost, but maybe can be rescued in some way. The places that I use in my paintings are typically mundane  but I try to imbue them with a greater meaning…a sense of what’s gone before, a spirit of the place, if you like.

I get the sense that you are preparing the viewer for the probable demise of civilisation. There is a slight sense of foreboding in your work. Is this intentional or are you simply a nature lover?
We visit a place every year on holiday where they’re digging a lost city out of the sand, a whole city disappeared. Then I come back to the UK and I see a similar thing, a previous civilisation’s grand architecture is being engulfed by undergrowth and slowly returning to nature – be it railway structures, hospitals, industrial buildings, factories, Victorian pavilions, etc. So I try and make a connection between these lost societies, so that a railway viaduct becomes a roman archway etc. Someone commented that the foliage in my work could be a metaphor for a sort of laissez-fairism and I suppose there could be seen to be an element of this in it. 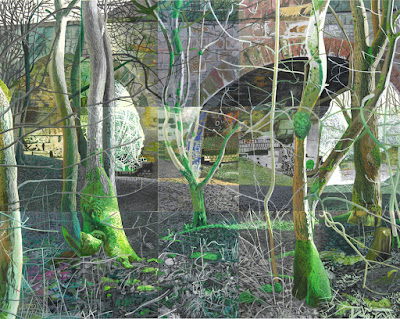 Having known you for some time I think of you as an extremely modest person. Do you find it difficult when people praise you for your artistic talent?
Of course, but it’s probably because of the detached way that I work, doing a segment at a time, never the whole (and I never really get to see the work as a whole until hanging it up for a show), divorces you from the creation in a way. So when someone says to me that they like the work then I really don’t feel as if I’ve painted it, not as a whole anyway, and I haven’t. I just feel part of the process and I can’t take all the credit…. like a cog!

Is humility essential for an artist or does egocentricity have its place?
An artist who doesn’t like to show off is a difficult combination. But I suppose the egocentrism comes into it when you lock yourself away in a studio for months on end to rub coloured pigments onto a canvas with a wooden stick with hair on the end and then have to convince yourself it’s meaningful.

What is your main ambition as an artist?
To design and paint better pictures.

Who is your favourite painter?
This changes every week, last week it was Richard Diebenkorn, this week it’s Euan Uglow, the following week it could be Allan Davie. 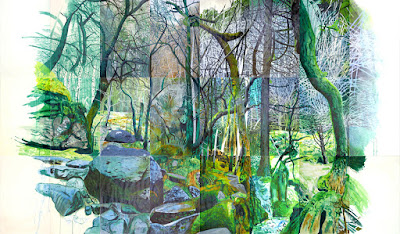